*The Widow Lerouge, by Émile Gaboriau 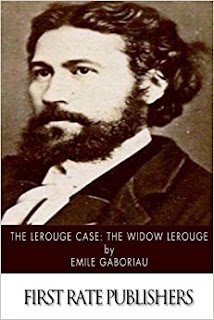 "...let it be a lesson for the remainder of your life... remember it is useless to try and hide the truth; it always comes to light!"
This book is yet another entry in this year's reading project involving the history of crime/mystery fiction. I had thought I'd be somewhere in the 1880s by now (since this year was my reading was supposed to have taken me through to 1914) but it seems that the 1860s were a banner decade for mystery and crime writing so I'll be hovering here for a while yet.

just a tiny bit of history before we get to the mystery:

French crime writer Émile Gaboriau should be much more well known, more widely read in the realm of crime fiction than he actually is by modern crime readers, since he was a prolific author of twelve books and a volume of short stories.    According to Professor Stephen Knight in his Towards Sherlock Holmes: A Thematic History of Crime Fiction in the 19th Century World, Gaboriau also gave readers "the first major police detective in crime fiction."  He goes on to quote Yves Oliver-Martin from his work Histoire du roman populaire en France de 1840 à 1980), who said that Gaboriau's Dectective Lecoq was, in fact,  "the prototype" (56).  While Lecoq makes only a brief, introductory appearance here in L'Affaire Lerouge, he will become involved in four more cases, and even the great Arthur Conan Doyle would bandy his name about in A Study in Scarlet, where he is referred to by Sherlock Holmes as a "miserable bungler."  While Holmes may not have thought much of Lecoq, his creator revealed that Gaboriau's "neat dovetailing of his plot" attracted him to the author, while Daniel Stashower (Teller of Tales: The Life of Arthur Conan Doyle)  notes various similarities between Holmes and Lecoq (80).   And really, it  takes no time at all once inside of The Widow Lerouge to discover Gaboriau's influence on Conan Doyle's great detective.

Since coincidences abound in The Widow Lerouge, it seems appropriate here to throw in an interesting real-life coincidence before moving on to the book itself.  Going back for a moment to an earlier post, it seems that in 1862, while Paul Féval was putting together his Jean Diable,  he had taken on Gaboriau as his secretary.  Molly Carr in her book In Search of Dr. Watson notes that while Gaboriau's M. Lecoq was based on the very real Eugene François Vidocq, "a man who began as a thief and then became a high-ranking police official in Paris," a certain "villainous" Lecoq showed up as a character in  Féval's first novel of his seven-book Habits Noirs (Blackcoats) series.  Her idea is that Gaboriau may have

"quietly appropriated the name for himself, giving it to an upholder of the law rather than to someone who was not."

Whether or not that's how things went down, it's still an interesting factoid.

As noted above, L'Affair Lerouge began as a serialization or feuilleton, in Le Pays in 1863.  (For more info on the history of the feuilleton, click here.)  It was published in novel form in 1866 by E. Dentu, and since then it has been translated into a number of languages.  The story begins when, on Shrove Tuesday, March, 1862, "five women belonging to the village of La Jonchere" turn up at the Bougival police station to report that no one had seen their neighbor, the Widow Lerouge,  for two days.  Evidently this "sudden disappearance" was not only out of the ordinary, but it was alarming, since the women were concerned that some sort of crime may have occurred.  Crime is a rarity in Bougival, but the gendarmes went to check it out along with the commissaire. They find the door to the widow's home locked and while waiting for the locksmith to get it open, a young boy hands them the key which he'd found in a ditch.  When they walk in they discover that the place is a mess with furniture that had been "knocked about," and various trunks and drawers had been forced open.  As they go deeper into the house, they discover not only that there's even more of a mess, but that the missing Widow Lerouge is dead, with her face buried in the ashes of the fireplace. Witnesses and neighbors are questioned to discover exactly who this woman was during her lifetime, and then the investigating magistrate, M. Daburon, appears on the scene, along with the chief of detective police Gevrol and his "subordinate," Lecoq. He was


"an old offender, reconciled to the law. A smart fellow in his profession, crafty as a fox, and jealous of his chief, whose abilities he held in light estimation."

It is Lecoq who asks for a certain M. Tabaret (nicknamed Tirauclair), who had discovered the truth in an earlier  case for a which an innocent man was found guilty and nearly guillotined.  Tabaret is an amateur sleuth, who "goes for playing the detective by way of amusement."  He is, however, widely respected by Lecoq, and so he joins the investigation. As it turns out, his involvement is a good thing, since Gevrol decides to follow one slim lead, leaving Tabaret to continue his "researches" outside of Gevrol's. As he says, "I am, I search, and I find," and it isn't very long until we get a taste of Tabaret's capabilities as an armchair sort of detective. I swear, it's like reading the part of a Holmes story where he dazzles everyone with his observations.   The case will continue until the culprit is discovered, although things change quickly throughout the story, meaning once you think you know the "who," don't be surprised that as circumstances change so will your guess.

I will say that while The Widow Lerouge is a solid mystery story, it's a bit frustrating because there are a number of coincidences that turn things on their heads and that have a bearing on the later parts of the tale. Normally I want to scream when a writer does this, but actually, to my surprise, once I got past my own prejudices on that issue, I realized that it sort of worked here. And  then, there's the ending, which I won't divulge, but suffice it to say that I don't think it was thought out very well at all. I can't say why without spoiling the story, but the "who" started to  become very obvious and I have to find fault with the author for his methodology here. Hopefully he improves in the later books, but in this one, well, it's amateur.    Still, as in most books like this one, for me it's all about the journey, and that was truly great fun.  There's a good story underlying it all, making this book well worth reading.  Perhaps it's time to give those domestic noir novels that are hot right now in the crime world a rest and give something classic a chance instead.

ps/find a better version than this one -- I was appalled a) that there was no translator given and b) that there weren't even page numbers!