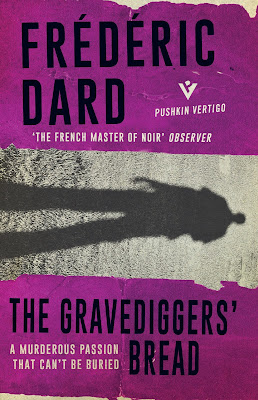 "You cannot change someone else's destiny. Each of us bears our own skin and thoughts along the furrows of Fate."

When the mail arrives and I open an envelope to find a Pushkin Vertigo book inside of it, it's happy dance time at my house.   The Gravediggers' Bread did not disappoint; au contraire,  it a dark, well-plotted noir novel that,  as with the best of the best noir novels, has a psychological focus that is the true attraction.  Combined with other elements such as setting, pacing, and some unexpected plot twists, the result is a claustrophobic, bleak, dark, and highly atmospheric story that turns out be a complete surprise, even though I was absolutely positive I knew where it would be heading.  These days, in my case, that's rare.

Returning to France after two years in Casablanca working with "a scoundrel" in a job that didn't quite pan out, narrator Blaise Delange is now looking for work.  Out of money after failing to find a different job in Morocco, Delange makes a call to his friend in Paris  to let him know he didn't get the latest job to which he'd applied.  According to Delange, it's the same old story -- he's "always last in the queue when they're giving things out."   On his way out of the post office phone booth,  he steps on a small wallet, in which he finds eight thousand francs and an ID card belonging to a Germaine Castain who turns out to be the beautiful woman with the "too large eyes" who had  occupied the booth just before Blaise had stepped in.  Seriously in need of cash, he finds himself doing a strange thing: he decides to return the money to its owner.  He doesn't even understand why he should do this; he hasn't "always been very honest" in his life," and he hasn't been kept awake by scruples, but he finds himself on the way to Rue Haute where Germaine lives with her much older husband, the undertaker Achille.  Before handing over the wallet though, he removes a small photo of another man, obviously not Achille, which was a good thing, since Achille grabbed the wallet from her almost right away.  Dodging Achille's questions about where he'd found it, and not mentioning the photo he'd found brings gratitude from Germaine; from Achille he gets a job offer.  As he becomes more of an asset to Achille every day, putting him in direct contact with the two every day, he begins to realize that


"This strange couple concealed a mystery, and I was eager to find it out."

The greatest mystery, according to Blaise, is why Germaine stays with her husband.  As Delange learns more about the strange relationship between Achille and Germaine,  he finds himself drawn deeper into their lives to the point where he is unable to make himself leave because of Germaine, but at some point he realizes that something has to give in this bizarre triangle, of which one side is, as he puts it,  "de trop."

It is to Dard's great credit that in such a short amount of space he has produced a novel of such depth, a story that focuses a great deal on fate and destiny, explored through the dark mind of one man.  His work here reminds me so much of that of Simenon, especially in how the reader eventually comes to realize that the ever-shrinking corner that Blaise has worked himself into is largely of his own making -- that he was trapped before he was even aware of his situation.  I can't say how this is so without giving things away, but the combination of the stuffy, claustrophobic provincial town in which the events of this  novel occur,  the intense psychological depth afforded to Dard's characters, and the initial slow pace of this story that eventually gathers speed throwing in a number of twists along the way all make The Gravediggers' Bread an unforgettable story that I can certainly recommend to noir enthusiasts.