*climbing back into my comfort zone: At the Villa Rose, by A.E.W Mason 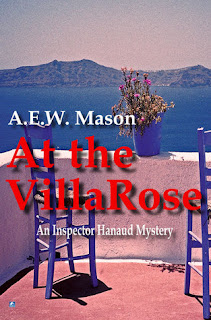 I'm back in my happy place (aka yesteryear) once more with this book, which is Albert Edward Woodley Mason's first installment of a series featuring Inspector Hanaud of the Sûreté.  I first came across this title while reading Martin Edwards' The Story of Classic Crime in 100 Books, where he describes how Mason got the idea of writing this book:


"On a visit to the then-renowned Star and Garter hotel at Richmond, A.E.W. Mason saw two names scratched on a window-pane by a diamond ring: 'One was of Madame Fougere, a wealthy elderly woman who a year before had been murdered in her villa at Aix-les-Bains, the second was that of her maid and companion, who had been discovered ... bound and chloroformed in her bed.'  The incident stuck in his mind, and visits to a provincial conjuring show, a murder trial at the Old Bailey, and a restaurant in Geneva supplied him with further material for the plot of a detective novel." (26)

Mason teamed his Hanaud with Mr. Julius Ricardo who wasn't a detective but rather, as Edwards describes him, "a fastidious dillettante who had made a fortune in the city of London."  In fact, as we meet Ricardo, he is in Aix-les-Bains in the second week of August where he normally spent "five or six weeks" as part of his "habit" at that time of year.  More specifically, he is at the Villa des Fleurs on a Monday evening,  where instead of gambling, he prefers to watch  "the spectacle of the battle which was waged night after night between raw nature and good manners." It is at the baccarat table where Ricardo lays eyes on Harry Wethermill, an "Englishman," and young Celia Harland, who is there with an elderly woman.  He watches them for a while, and the following night Ricardo and Wethermill walk back together to the Hotel Majestic where they're both staying, chatting about nothing.  On Wednesday morning, Wethermill bursts into Ricardo's rooms with a newspaper that carries the story of "an appalling murder" that was "committed at the Villa Rose."  The dead woman was the wealthy Mme. Camille Dauvray; her maid had been chloroformed and her hands tied behind her back.  The newspaper also reports the disappearance of Mme. Dauvray's companion,  a "young Englishwoman," whom Ricardo guesses was Celia, the woman with whom he'd seen Wethermill on Monday at the Villa des Fleurs.  The newspaper suggests that it was she who was responsible for Mme. Dauvray's murder; Wethermill suggests getting in touch with M. Hanaud, "the cleverest of the French detectives," since Hanaud just happens to be in Aix-les-Bains on holiday.    Hanaud warns both men that "the case is dark," but agrees to take it on.

This really could have been a fine book, except for the fact that Mason decided to reveal the "who" way too early, and  then combined witness testimony and different narratives relating to the crime into one account to explain it all.  Gah! How disappointing!  Edwards refers to this as "lop-sided story structure," and I'm afraid he's spot on with that description.  Had the author put it all together in a different way, there's a hell of a story in there -- a fake medium with a conscience, rivalry, and a rather sadistic set of villains who, in at least one scene, find a sinister joy in causing pain to their victim.  All of the elements are there to have made the book a fun reading experience but they come too late -- by then the shock/suspense value is sort of lost.

I've been looking at what readers say about this book, all of whom noted the crappy structure that ruins the surprise, a point with which I agree, but what I don't agree with is the idea that these characters are, as one person said, "one dimensional."  As someone who pays close attention to the people who populate the books I read, there's a lot going on with the characters in this novel that is well worth reading.  If you're in this just for the usual crime, investigation, and solution, you miss a lot of the interactions between the evildoers and their victims, especially when it comes down to the motivations behind their actions.  The human interest is not just limited to the villains of this piece, either, but I can't say more without giving everything away here.

I will be revisiting Hanaud starting in 2019 when I creep into the Golden Age with my crime novel reading; I'd say that even though you now know  that things are going to be a bit "lop-sided" in the storytelling, it's still a good book and that there is a lot happening here to make it readworthy.  Read it slowly, don't devour it, and now, armed with knowledge of how it's going to be, sit back and relax, paying attention to the unfolding of the plot.

Recommended, certainly for readers  interested in twentieth century,  pre-World War I crime writing.  Frustrating it may be, but there's a good story within the lopsidedness.