and we say goodbye to 1922 with The Lyttleton Case, by RAV Morris 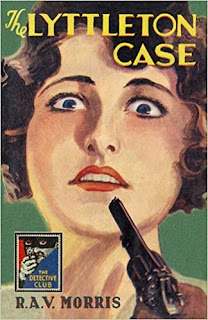 I know it will take some doing, but anyone who plans to read this book ought to skip the dustjacket blurb and move right on into the text.   Once again, and to my great dismay, whoever wrote it has given away one of the elements of the plot.  Seriously? Who does that?  For shame.

Ronald Arthur Vincent Morris, the author of The Lyttleton Case, never wrote another mystery novel after this book's publication; with no follow up, as Douglas A. Anderson notes in the introduction to this edition, the novel "lapsed into obscurity."   Indeed -- I'd never heard of it until I started collecting volumes of Harper Collins' reprinted Detective Club novels.  Trust me, the ending is a complete surprise which I didn't see coming.  When the editor of the original detective story club edition says "the secret is well kept and the reader is left guessing, almost to the last page," he or she was not exaggerating.

Two mysteries begin this novel.  First comes the disappearance of wealthy financier James Lyttleton, who goes off to work as usual one day and is never seen again.  Telegrams sent to his daughter Doris  from various locations keep her posted about where he is, but after a wire from New York, he is not heard from again.  Doris' fiancé, journalist Basil Dawson, decides to travel to the Big Apple to try to locate him, but he is presented with a set of baffling clues that lead nowhere.  Turning over what little he has to the NYPD, Dawson returns to England to give his information to Scotland Yard, and to wait along with Doris for Lyttleton's return.   The second mystery unfurls as James Candlish, Chief Inspector of the Yard's CID,  a man who has a "passion" for natural history, has started his annual vacation time, which he's spending in  "an exploration of the flora and fauna of the Southshire Downs."  After a "most satisfactory morning's work," he takes some time next to a stream to have lunch and to write down his observations in his notebook, but his idyllic moment is disturbed with the discovery of a man's body.  The Coroner observed that the dead man was between twenty-eight and thirty-five, he'd died of natural causes, and had been in the water most likely four to five days.  Even though there isn't much to go on, when Candlish returns from his holiday, his interest in the case never wanes.  He is also put in charge of the Lyttleton case, and as the investigation progresses, a few too many coincidences crop up for his liking.  There are so many coincidences, in fact, that after reaching the halfway mark, I thought that it was game over and that I had it completely sussed, but no.  So a word of advice -- when you think you know what's what, you may want to think again.

Around the mysteries to be pondered in this novel, there are a number of interesting people who caught my attention, beginning with James Candlish.  He tends to take a Zen approach to solving crime:

"He had found by experience that by dismissing his work entirely from his mind for a while, he was able to return to it with renewed energy, clearer perception, and deeper insight. In fact, as he sometimes told his cronies, it was only when consciousness was wholly taken off a subject, that the subconscious mind was given a chance on working on it."

Then there's Police Constable Hutchinson, "a diligent reader of detective fiction," who smokes "shag" like his idol Sherlock Holmes when contemplating a problem.  In his room he has a violin, a syringe ("that rather as a reminder of his great prototype than for actual use"), and a dressing gown, all in emulation of his idol. His current reading project is  Freeman Wills Crofts' The Cask (1920)  but he's also a huge fan of Gaboriau's Lecoq and of Poe's M. Dupin.  In the introduction to this novel, Anderson notes that the mentions of these various detectives exemplify the author's "familiarity with the detectve fiction genre," but it also gives the story a bit of a comic interlude.   Finally, Miss Doris Lyttleton made my favorite character list -- she is not only portrayed as a modern woman but for reasons I cannot divulge, she turns out to be a first-class heroine in her own right.

The themes that recur throughout the novel  are pretty obvious so I won't go into them, and there's more than one foray through London streets and environs which added to the story.  And while I genuinely enjoyed The Lyttleton Case, the mechanics of the solution seem to take forever in the telling at the end.  On the other hand,  it really is,  as Anderson notes, quoting Barzun and Taylor, a "well-written, slow, carefully plotted puzzle."  It's also highly entertaining which is never a bad thing.  Recommended for fans of vintage crime; cozy readers would enjoy it as well with the caveat that this book was written in 1922 so it's not nearly as fast paced as most modern cozies. It really is a shame that Morris never wrote another crime novel -- given how enjoyable is his one and only, a second one would have been more than likely top notch indeed.