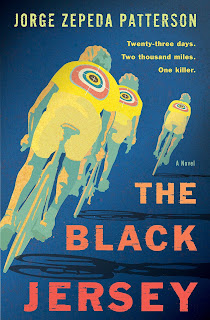 
The narrator of this account, Marc Moreau, says close to its beginning that


"We understood that every so often there would be an annus horribilus, a cursed year, for the Tour de France. By the time we finished the first four stages of the tour, we would start to suspect that this could be the worst of all."

He's not joking -- the mystery within this novel centers around the attempts to discover who is responsible  for a string of horrific incidents, some deadly, among the cyclists competing in that year's Tour.  Moreau, a domestique for Team Fonar,  is asked by French police Commissioner Favre to assist him in trying to solve the case, since Favre believes that "the killer or killers belong to the circuit."  As he notes, those responsible have "struck with surgical precision to maximize their effect on the results of the race."  He's come to Marc not only because of his background in the military police, but because he's on the inside.  The executive director of the Tour is also hopeful that Marc will help since these accidents, as he puts it, are  "the most serious threat to the Tour de France in all its history."   Somewhat reluctantly he agrees to do as they ask.

Had the author left it there, the mystery and its solution would have been satisfying enough, but this is definitely not your average crime novel, not by any stretch.  It is a very human story, and Marc is much more than an insider helping the police.  At the heart of this novel is the close relationship between Moreau and  Team Fonar's star cyclist Steve Panata,  with Marc destined over the years to be Steve's protector and domestique, doing anything and everything to ensure Steve's victories in the Tour.   As he and the police uncover evidence leading toward finding the "killer among you," Marc also comes to as the blurb notes, the "sickening realization" that everything that's happened has been to the benefit of his own team.  That's bad enough, but he also finds himself having to battle his own feelings for the good of the team, and he is under a huge amount of pressure to leave his role as second fiddle and go onto victory in his own right.

I'm not a huge sports fan at all, I'm a ten-mile-ride-is-my-limit sort of cyclist so I can't speak to what he's  done right or not here as far as the Tour de France, but the decision made by the author to use this exacting competition as the milieu for his story turned out to be a good one.  As he says in this interview with The Spain Journal, the Tour


"takes the passions to the limit. Emotions are bare wires when competing for something that demands so many sacrifices.  Love, ambitions, loyalty or betrayals are over-dimensioned."

All of  what the author says in this short bit of quotation is made so vividly real in this novel, along with the intensity of the competition, to the point where, as also noted in that interview (although I'm thinking he meant "rider," not "runner'),


"If a runner is willing to kill himself, descending a mountain at 90 kilometers per hour on precarious roads and huge abysses, why would he not be willing to kill for it?"

The author did such a fine job here that even I had no idea who was trustworthy and who was not, and I never guessed the who.  I will say that I had to go back when all was revealed and read that part again (it's a little complicated and it was a wee bit on the murky side), but there was still one more  shocking and unexpected surprise in store even after all became known.

The Washington Post featured this book in June as one of "9 Picks for Your Beach Bag," but I would consider this novel as way more than just a fun summer read.  The author's  intense focus on the people here made this a novel I won't soon forget.