Murder in the Crooked House, by Soji Shimada 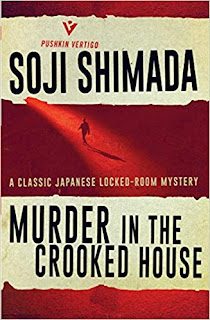 A few years ago I read and loved Shimada's The Tokyo Zodiac Murders so it was a no-brainer as to whether or not to buy his newest, Murder in the Crooked House.  As in The Tokyo Zodiac Murders,  at one point in the action, everything comes to a full stop as the author throws out a challenge to his readers, letting us know that at this point in the game we have everything that we know to solve the mystery.   The question is "Can you solve this case?"  The answer:  no, not I.  I did manage to figure out the who but not the why and not the how, and even that  small victory came only after making my way through a wriggling school of red herrings thrown in throughout the story.  To those of you who solved it by the time the "challenge to the reader" is thrown down,  I would love to have your brains, because I was kept in the dark pretty much throughout. 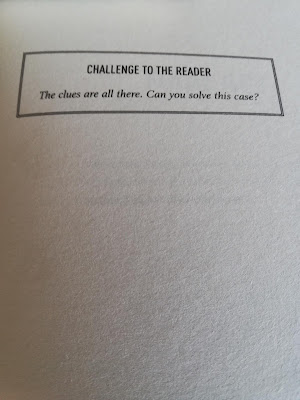 And small wonder.  I don't know how anyone could have possibly solved this while reading because the solution is so farfetched and so out there, well beyond the norm of many of the locked-room crime novels I've read.  In fact, whenever reading in this subgenre, I flip the switch in my brain to "suspend disbelief" mode so that I'm prepared when the denouement comes.  On the other hand, once I knew how Shimada made it all happen, I found myself going back to the diagrams scattered throughout the novel trying to put things together and doing the inner "aha" as I saw how it could have been pulled off (sort of).     I have to admire the author's creativity here, and  I have to wonder how many hours he must have given to setting up the entire story, not to mention how much fun he must have had in doing so.

In the long run, this is a book where it is best to know next to nothing about the story.  What little I'm willing to spill here is that the action takes place in a house somewhat like the one pictured here on the Japanese cover.  As we learn,


"At the top of Japan's northernmost island, Hokkaido, on the very tip of Cape Soya, there's a high plain that overlooks the Okhotsk Sea. On this plain stands a peculiar-looking structure known by the locals as 'The Crooked House.' "

At present it sits empty, on the market for many years, and "will probably stay that way."  One might think that it's because of its remote location, but in reality,


"it's far more likely the murder that keeps buyers away."

The house's actual name is the Ice Floe Mansion, built and owned by Kozaburo Hamamato, a somewhat eccentric industrialist who, at the time of the events that took place here, was in his late 60s.  He occupies the tower, which bears more than a passing resemblance to the leaning one in Pisa; his eccentricity even includes a drawbridge that connects with the rest of the house.  Hamamoto refers to it as "this old man's whimsical mansion," because, as the back blurb notes, it is a

His daughter Eiko and three household staff also occupy the "crooked house," and as the story begins, the Hamamotos have opened their house to a number of guests for the Christmas holidays, 1983.  The first night of the guests' stay turns out to be anything but normal, but things become even more off-the-wall weird once daylight brings the discovery of a most bizarre murder.    Going back to the blurb once more, the victim has been "found murdered in seemingly impossible circumstances," in a locked room which is accessible only from the outside, the murderer having left no footprints in the snow either coming or going.  While a few of the houseguests take on the puzzle the killer has left behind, the local police are called in and do their best to try to put the limited (and strange) clues together to form a picture of what had happened.  When another death occurs, in circumstances that are perhaps even stranger than the first murder, they have their hands full and call to Tokyo for help, bringing Kiyoshi Mitarai and his friend/sidekick Kazumi Ishioka to Ice Floe Mansion.  But even then ....

[as an aside, Mitarai and Ishioka are names readers will recognize from Shimada's The Tokyo Zodiac Murders; I actually did a double take when I came across them here for the first time on recognition since I had no idea that this was their second adventure. ]

To say more would be to spoil and I don't want to do that at all because it would be wrong to take away someone's fun in trying to piece together exactly how these crimes were committed.  What I will say is that the use of masks in this story  is most appropriate as  it seems that most of the people staying in this house over the holidays have things they desire to keep hidden, each masking his or her inner self behind a very different public persona while in the company of others.   I could go on here, but it would also be a spoiler to do so.

I loved the eerieness of the setting  in this book, which added an atmospheric quality to the novel.  Combining such a remote location, the howling winds during a blizzard, the greyness of the sea during the winter with the fact that the people in the house are all pretty much trapped there until the mystery is solved gives the story a claustrophobic feel that only heightens the strange events that take place.

In comparing Shimada's earlier book with the present one,  I have to say that Murder in the Crooked House is much more reader friendly, moving much more quickly through to the solution than was the case in Tokyo Zodiac Murders; I also felt that this time around, as I said earlier, I had to keep myself in the state of suspension of disbelief a bit longer than while reading the first book. When all is said and done, I had a lot of fun with this novel and certainly recommend it, most especially to people who find pleasure in reading locked-room/impossible crime novels, which are in many ways a very different breed than your average crime/mystery novel and may take a bit of getting used to.

Once again, hats off and major applause to anyone who solved this crime before the answers were made known.  I was left completely in the dark. And that's okay.