*The Ghost Riders of Ordebec, by Fred Vargas

To be very blunt, I was not at all fond of the last two Adamsberg novels because of their trend toward the supernatural.  I bought The Ghost Riders of Ordebec hoping that the author had left all that behind, and while the title may suggest otherwise, I can definitely say that human agency, rather than spectral, is the force at work  in this very fine seventh-in-series novel.  I feel like in this book, Vargas has circled back to the author whose work I first fell in love with (pardon the bad grammar) and that things (at least for me) are back on track in this series.  She's also upped her game here in terms of writing.  While Ghost Riders of Ordebec may not be perfect, it is a great blend of intriguing mystery, first-rate characterizations and humor.

As Adamsberg is pondering the strange case of a man who killed his wife with breadcrumbs, a woman from Ordebec, a small town in Normandy, comes to him with an even stranger tale, prefaced with the words "People are going to die."   He has to pry the story out of her, but eventually it comes down to the fact that a man in Ordebec had disappeared some three weeks earlier, on the night her daughter Lina saw The Furious Army, known also as the Ghost Riders.  She saw this "army of the dead, of the putrified dead, an army of ghostly riders, wild-eyed and screaming, unable to get to heaven," which "carry along some living men or women, who are heard shrieking and lamenting in suffering flames."   As his colleague, the walking encyclopedia Danglard explains,


"...whatever the efforts of the witness when he goes home after seeing this terrifying vision, and however many Masses are said, the living persons he's seen riding with the army die in the week following the vision. Or within three weeks at the outside...All those who are "seized" by the Riders are certainly bastards beneath contempt, real villains, exploiters, corrupt judges or murderers. But their crime is not generally known to their contemporaries. They've remained unpunished. That's why the army gets hold of them."

As it turns out, Lina had seen the missing Herbier with the Ghost Riders, and now he's gone. While unenthusiastic at first, Adamsberg eventually decides to go to Ordebec and see what's up with this ghostly army -- which encompasses the bulk of this very compelling mystery --  but in the meantime, he also has to deal with a local pyromaniac named Momo who is in the hot seat for allegedly setting fire to a car with someone inside.  When it's discovered that the dead man is the  head of a leading industrial group and evidence points toward Momo, the pressure is on from high for an arrest.  Adamsberg knows this is not Momo's work, and likely a frame, but he has to discover the identity of the real guilty party before Momo is sent to prison and enlists the help of his newly-discovered son.

While the mystery of the ghostly army is compelling, what really makes this book is the characters. There's Adamsberg, of course, but when an author can breathe so much life into so many other people in his/her books, it's just amazing.  The police station where Adamsberg works is populated with a number of very unique people,


"...a hypersomniac who goes to sleep without warning, a zoologist whose specialty is fish, freshwater fish in particular, a woman with bulimia who keeps disappearing in search of food, an old heron who knows a lot of myths and legends, a walking encyclopedia who drinks white wine non-stop -- and the rest to match."

including a cop who can come up with alexandrines suitable to each occasion.  But it's not just the police who are well drawn -- there is a family of "geniuses" Adamsberg meets in Ordebec who pop out at the reader.  One is prone to visions, one says words backwards, one thinks he's made of clay, another was born with six fingers on each hand and used to scare the crap out of bullies by putting devil curses on them, while another enjoys gathering and cooking insects.  The author's imagination must have been running on overdrive in dreaming up these people. And Adamsberg's newly-found son is also an interesting character as well.

While the mystery is fun, the solution is a wee bit rushed, but really, it's the getting there that will keep you reading and highly entertained.  As the story unfolds, the two main mysteries bring with them other surprises to be revealed along the way.  I'm so happy that Vargas is back on top of her game here -- and I'll definitely be looking forward to the next installment of the series.  Highly recommended, although maybe a bit on the lighter side for avid crime readers who enjoy more edgy mystery novels.

ps/don't let Ghost Riders of Ordebec be your intro to Adamsberg -- start with The Chalk Circle Man and work your way forward. You'll miss a LOT if you don't. 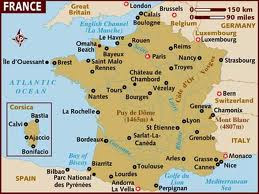