another British Library Crime Classic, and it's a good one: Murder of a Lady: A Scottish Mystery, by Anthony Wynne 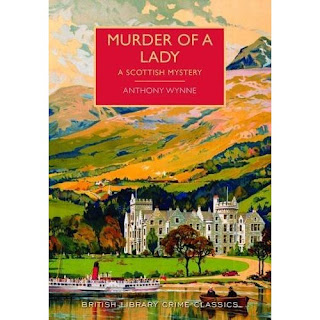 "...there's something wrong with this house."

The thing I enjoy most about locked-room mysteries is, of course, waiting for the solution to materialize.  Up until that point,  I am mentally watching for anything that might be a clue as to how a locked-room murder was pulled off.  This time, there was nothing to give it away, and I had to wait until the last few pages for the answer.  Clever it was, indeed; I never would have guessed.  Yet not all action takes place within the confines of a single locked room -- two other equally puzzling murders happen right under everyone's noses with no suspect in sight. So here you've got a bonus:  a locked-room mystery and an impossible-crime story.

Set in Scotland, Murder of  a Lady was written by Anthony Wynne, the pseudonym of Robert McNair Wilson (1882-1963).  When he wasn't writing histories (12) or wasn't practicing medicine, he spent time writing crime novels --  with some 28 titles under his mystery-author's belt. This particular book is number twelve of his Dr. Eustace Hailey series; Hailey is not only an amateur detective but he specializes in mental diseases. I'm sure I'll cross paths with Dr. Hailey in the future -- it's sad that for some reason Poisoned Pen Press in association with the British Library didn't publish his first crime novel, The Mystery of the Evil Eye aka The Sign of Evil.  Seriously, why start with number twelve?  Pet peeve, and anyone who knows me  knows it drives me crazy.

The first victim in this story is an elderly woman, Miss Gregor, who according to everyone, doesn't have an enemy in the world; she is praised for having spent her life "in service."   Yet, this paragon has been found murdered in her locked bedroom (windows locked as well, of course) so at least one person seems to have wanted her out of the way.  But why? With a house full of suspects, trying to narrow down the who would seem to be a daunting task, especially since the only clue to be found is a herring scale.   As Dr. Hailey surveys the scene, he is met by Inspector Robert Dundas, who has been tasked with solving Miss Gregor's murder.  It's important to him: the case is the chance of his life, so he tells Dr. Hailey that he does not want his help, and that there "must be no independent lines of enquiry" going on. Hailey agrees to abide by Dundas' rules, and it isn't long before Dundas admits defeat and comes back 'round to Hailey. However,  circumstances lead to another police inspector being brought into the case -- and he's certain he has all of the answers. Dr. Hailey, though, isn't so sure.

While the locked-room/impossible-crime components will probably be enough to please any vintage-mystery reader,  I always go right to the human element in crime novels, and the dynamics at work in this household are perfect for examining what's in the minds of the people who live there. As the quotation with which I started this post states, "there's something wrong with this house," and Wynne gets to the dark heart of exactly what that something is.  It takes a while to get there, but it is definitely worth the read time.