*Some Must Watch, by Ethel Lina White 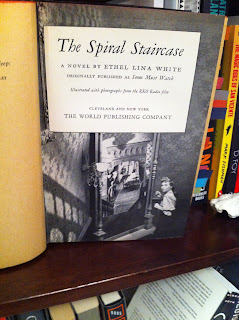 This book was so much fun to read and it hit all of my classic mystery reading buttons --  an isolated family home, a murderer on the prowl and all of it set against the proverbial dark and stormy night, complete with banging shutters and an elderly bedridden woman predicting doom and gloom.  How could it possibly be any better???

Ethel Lina White (1876-1944) was a prolific novelist, with a 17-book career starting in 1927 with The Wish-Bone.  Some Must Watch is her sixth novel, and it's a good one.  I'm almost sorry I didn't wait for the proverbial dark and stormy night to read it since it would have been the perfect backdrop for this book.  The action here takes place over the course of one stormy night, set in a family home called The Summit  "on the border-line between England and Wales."  It's  twelve miles away from the nearest village, and twenty-two miles from the nearest town; a "three-storied house, with two staircases..."  As one might imagine, the Warren family has trouble finding or keeping domestic help, since no one really wants to live in such an isolated place.  That's not the case with Helen Capel, though -- she seriously needs a job after "some months of enforced leisure" and employment suits her just fine. And unlike some characters in  Victorian novels,  she's not there hoping for a "potential husband" -- she plans to keep investing in Savings Certificates, since as she says, "she believed in God -- but not in Jane Eyre." Helen is joined by Mr. and Mrs. Oates, the couple who help to keep things running at the Summit, as well as the Warren family: Professor Sebastian Warren, his sister Blanche who doubles as housekeeper, the Professor's son Newton and his wife Simone, and the Professor's elderly but feisty mother Lady Warren.  As we discover about her,


"The household was waiting for her to die, but she still called the tune. Every morning, Death knocked politely on the door of the blue room; and Lady Warren saluted him in her customary fashion, with her thumb to her nose."

Also in attendance on this particular night is Stephen Rice, who's come for help from the Professor as he prepares for a civil service job, and last but not least, Nurse Barker (whose last name as it turns out, is quite appropriate), who has been hired to help take care of Lady Warren.

The opening of this novel is very well done, setting the tone and the atmosphere for what's to come.   Helen is just returning from a long walk as day is about to slip into night. She still has some way to go before reaching the house, and while she's making her way back through the dense grove that sits between her and the Summit, murder is on her mind.  Four of them, to be precise -- "credibly the work of some maniac, whose chosen victims were girls." The murders started out in the town, moved to the village, and the last victim had been killed in another "lonely country-house, within a five-mile radius" of the Warren home.  In short, the killer is getting closer and much more bold, moving from a "street murder" to actually going inside a house to make his move. Thinking about these murders spooks Helen to no end, and as she comes closer to her goal, she actually believes she sees one of the trees move.  Feeling relief as she enters into safety once again, it isn't long before the house is thrown into upset: the doctor taking care of Lady Warren announces that another murder has just occurred, this one committed very, very close to home.  The Professor puts the house on lockdown -- no one in and no one out.  But the night is only just beginning .... 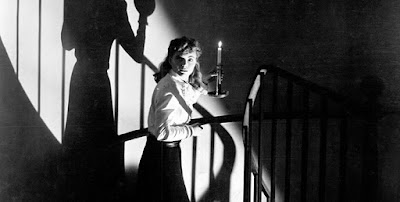 And right now I so want to do that evil villain laugh, the  "muah-hah-hah-hah-hah" reminiscent of the old Shadow radio show opening because this is just that type of book.  And while I thought it was clever and well paced, with ratcheting tension that continues throughout the night making me flip pages in a frenzy, I see that some readers weren't so crazy about it.  Well, it sort of goes with Ethel Lina White territory that there are a lot of psychological observations from the characters in her work, so here the talky parts didn't bother me at all. Personally, I think the dynamics among the characters are just as much a part of this story as the mystery, so I quite enjoyed it. And the thing is that when it comes to the film, all of that is missing, which is really a shame.

In fact, I have no idea why the powers that be who made this film changed it as much as they did because to me it really was a letdown after having read the novel.  First of all, they took Helen's character (played by Dorothy McGuire) and made her unable to speak and I still haven't figured that one out.  Second, there is very little quality interaction among characters, since they've stripped the whole thing down to the point where there are only a handful of people involved; the nurse's role between book and film is pretty much left out entirely.  Not only that, but for me, there was way more suspense and tension in the novel than the movie gave off, to the point where not too far into the movie Mr. Film Critic guessed who the killer was, something he never does and something  I didn't do while reading the book.  So if you've only seen the film, you're missing out on so much more.

If anyone can come up with a cool design for Ethel Lina White fan club t-shirts, let me know. I'm really starting to appreciate and enjoy her work with every book of hers I read.  Some Must Watch is definitely another boo-yah! read for me. I only wish the weather had been bad so I could have crawled under the covers spooked out by thunder and lightning while reading it.
Posted by NancyO at 10:42 AM