gritty doesn't even begin to cover it: Clinch, by Martin Holmén 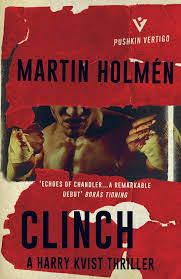 The direction of Scandinavian crime has just changed with Martin Holmén's Clinch, and that's a very good thing.  There are two more books to come from Martin Holmén, and that's a very good thing as well.  Like Harry Kvist, the former-boxing champ who is the star of this show, Clinch delivers a serious gut punch that will leave its readers reeling. I loved this book. Absolutely.

Let me say this right up front: this is not your standard Nordic crime novel.  Clinch would be right at home on a hardcore noir reader's shelf.  It's a very physical novel, a book where the term "gritty" doesn't even begin to cover how dark it is. It's also a story that takes its readers into the streets and alleyways of Stockholm in the early 1930s where people are just trying to survive however they can, be it by pimping, prostitution, thievery, whatever.  And even when the story moves into the better neighborhoods, even there things don't become any brighter.

Harry Kvist is just trying to make a living like everyone else.  A former boxing champ, with two stints in prison, he's now a debt collector.  As the story opens, he's at the home of Zetterberg, who had bought an old Opel but didn't make the full payment.  Harry's job is to convince Zetterberg that he needs to pony up with the cash -- if Zetterberg pays and Harry gets the money to his client within five days, Harry's share is fifteen per cent. In this case, the outstanding debt is 2,100 kronor so it's definitely a debt worth collecting.  When he finally makes contact with Zetterberg, it ain't pretty -- things get very physical and Harry gives him until the next day to pay up.  He's tempted to really give Mr. Z. a "proper working over," but as he notes,


"A dead bloke doesn't pay his debts, a badly injured one ends up in a hospital."

However, when he comes back the next day to collect, not only is Zetterberg dead, but someone's set his place on fire ... and the cops really like Harry as the culprit.  He's picked up and later released, but with a warning that he's not "been ruled out of the investigation."  Harry just laughs it off but decides that he's going to clear his name and that he'll find the one witness who can clear him. Easier said than done, but Harry's determined, and he's also eager to stay out of prison -- they can easily throw the book at him for being gay, which is a crime at the time. From there the story moves in some very strange, dark and twisty directions that had me quickly turning pages to see how things were going to come out, gut clinched in suspense all the way.

I offer major kudos to Mr. Holmén for bringing something new to the table and new to the genre. First of all, the 1930s setting is viable and leaps off every page; his descriptions of the Stockholm slums and social/political tensions are beyond outstanding.   Second,  Harry Kvist is not meant to be your average crime solver -- he is sensitive, loves animals, cares about other people, is generous when he has the money.  On the other hand, as I said earlier, this is a very physical novel, and Harry's sexuality both with men and women is writ large here, as is his propensity to violence.

When it comes down to it, Clinch is an explosive novel, best enjoyed by readers who are at home with  gritty noir that packs a major punch.  There is absolutely nothing cutesy here, no angsty detectives, no hints of the sort of Scandinavian crime fiction that is on bookstore shelves -- this is something very, very different and well, frankly, it's time for that to be happening.  Highly, highly recommended.  I will have to try to remain patient until the next book comes out but after reading and loving Clinch,  that's not going to be easy.