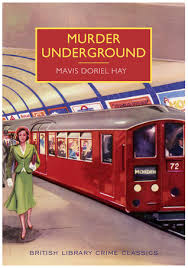 "The annals of murder are riddled with coincidence."

Between 1934 and 1936 British author Mavis Doriel Hay (1874-1979)  published three mystery novels, with Murder Underground as her first, followed by Death on the Cherwell in 1935 and The Santa Klaus Murders in 1936.   This is my first book by Hay, and while I found it a bit underwhelming, it certainly won't be my last.

Miss Euphemia Pongleton has been murdered, strangled with her dog's leash and left on the stairs going down to the Belsize Park underground station. There is a man in custody for her death, but no one at the Frampton Private Hotel (the boarding house where Miss Pongleton lived) can believe he actually committed the crime.  In fact, the denizens of the house have much more sympathy for the accused than they do for the dead woman, who was rather eccentric, cheap, rather "tiresome," and known to have "loved a sense of power."  While the police are called in to investigate, in this book the Inspector in charge has only a minor role, arriving late to the story.  The focus is really on the efforts of the people at the Frampton who try to discover who really killed her. In the meantime, someone else has his own reasons for wanting to conceal what he knows, and ends up causing more than a lot of confusion in the case.

Considering how very much I love these old books and British murder mysteries in general, overall this one was, like Miss Euphemia Pongleton, a bit tiresome.  What I enjoyed about it was the focus on the boarders, who have their own theories on what happened.  The best scene takes place at the beginning of the story, when all are together in one room, waiting to be called individually to talk to the (somewhat invisible at this point) police Inspector. There we discover that while these people feel sorry that she'd met with such a terrible end, they're also realistic, with one woman noting that


"It would be hypocritical to pretend that any one of us is overwhelmed at the removal of Miss Pongleton."

This conversation is very lively, with a novelist, Mrs. Daymer, applying her "expert" knowledge of the police, of investigations, and of the victim herself while "surveying the possibilities of the situation." The other boarders voice their own opinions or come up with logical questions that are discussed in turn, each one speculating on motive, means and opportunity.    But when outside of the boarding house, someone decides to gum up the works to protect himself and starts covering up his own movements and  telling a series of lies, the story quickly gets tedious, making the novel  tough to get through.  Talk talk talk, very little in the way of action until the book is nearly finished.   I read several reader reviews where people had said that they got bored enough to flip to the end, but really, it's so incredibly easy to figure out that no one should have had to do that.  For me the question was one of waiting it out to see how long it took before things are set right, and exactly how that was going to be accomplished.

While I won't sing the praises of this novel, I do still plan on reading her other two, so maybe they'll be a bit better.  However, as an example of the work of a previously-obscure woman mystery writer of the Golden Age, Murder Underground is very much worth reading.
Posted by NancyO at 10:57 AM