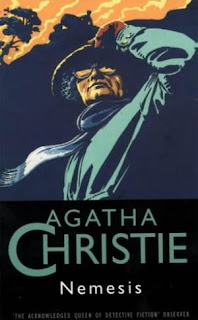 The cover photo above is probably my favorite for this book; mine is part of a set of  Bantam black leatherette hardcover editions and has a cover that is really dull.  However, it's all about what's inside, and there is nothing at all dull about Christie's Nemesis, where Miss Marple's cover as dotty old lady comes in more than handy.  I say her "cover," because as she discovers in this book, she has a propensity to be "ruthless" when she needs to and as it will turn out, she'll definitely need to call on that trait before all is said and done.  Personally, I think this is one of the best Marples in the bunch.

Originally published in 1951, Nemesis opens with our dear Miss Marple scanning the obituaries in the local newspaper, and running across a name she knows --  Mr. Jason Rafiel, whom she'd met while on holiday in the Caribbean, has passed away.  A week later, she receives a letter summoning her to London, where she is received by Rafiel's solicitors.  It seems that Mr. Rafiel has left her a bequest of twenty thousand pounds, but there's a catch:  Miss Marple must, within a year,  "investigate a certain crime," to "serve the cause of justice."  What that crime is though, is left unspecified, and the only clue she has comes in yet another letter inviting her to be part of Tour No. 37 of the Famous Houses and Gardens of Great Britain, a tour that will last two to three weeks.  She knows she must go, and taking stock once on the tour, notes that


"...What is involved in my problem is justice. Either to set right an injustice or to avenge evil by bringing it to justice."

She understands that this must absolutely be the case because it is "in accord with the code word Nemesis given to me by Mr. Rafiel."   What she doesn't realize, however, is how very strange this case will turn out to be.

Some time ago somebody in an online group I belong to said something along the lines of Christie being  for old ladies (I do believe the phrase "blue hairs" was used), and it sort of got my dander up. My brown-haired self was actually offended that someone who'd probably never even read her work was saying this.  This book disproves his statement -- not only is Nemesis an engaging mystery, but here we see a different side of our old-lady sleuth, who has zero tolerance, no matter what the circumstances, for evil, and a Jane Marple who will face down a deadly foe to serve the cause of justice. There's more, of course -- for example, a look at an England changed after the war -- but really this one is all about Jane Marple herself. 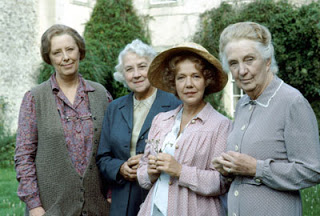 If you haven't read it yet, do yourself a huge favor and pick up a copy.  You can skip the TV adaptation with Geraldine McEwan -- not even close to the novel and very disappointing. I knew I was in trouble when I saw a Nazi soldier parachuting out of the sky, and then, of course, there were the nuns -- seriously WTF?   I'm still digging through garage boxes to find my Nemesis dvd with Joan Hickson as Marple but I can't imagine it would be anywhere near as awful as the McEwan version -- I finished it last night wondering if the screenwriters had even read the book.  But here, it's the book that counts, and Christie has outdone herself with this one.