dark, darker, moving into the territory of bleak: The Executioner Weeps, by Frédéric Dard 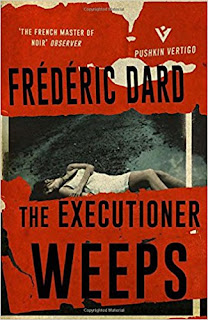 "There's nothing more terrifying for a painter than a blank white canvas. It's like a window that opens onto infinite possibilities. A window from which the most disturbing metamorphoses may emerge." -- 42

I started this book very late last night and actually tried to fight sleep to finish it, but alas, it was not to be and  I had to wait until today to finish it.  It's probably a good thing, since there is a sort of nightmarish aspect to the story as it comes down to the end.  Frédéric Dard has to be one of the darkest writers whose work graces the pages of these reprints by Pushkin Vertigo, putting his novels squarely in my wheelhouse.  I defy anyone who reads this book to not feel the slightest bit of adrenaline pumping through his or her veins while doing so -- by the end my guts were twisted in knots.  Far from being any kind of whodunit, it falls more into the psychological zone; I've seen it described as a thriller, but I'm not sure that fits either.  It's one of those novels where you just have a feeling in your bones that something terrible is coming down the pike so you brace yourself for it, but in my case, I don't think I prepared myself enough.  Holy crap -- this is a good one!

The beginning of the novel finds our narrator, French painter Daniel Mermet, at the Casa Patricio, a "very modest inn" not too far from Barcelona and located directly on the beach.  It was, as he says, "The ideal place for a holiday." But then, driving along the road one night, a woman carrying a violin case "deliberately" throws herself at his car, and he hits her. He puts her in his car and returns to the inn, where a doctor is called; luckily, she wasn't injured too seriously. She didn't come out unscathed, though -- she cannot remember a thing about herself, especially what might have caused her to bolt out in front of his car, much less as to why she's in Spain.   Mermet realizes that she speaks French, but the only clue to her identity is a handkerchief with the letter M on it and the labels in her clothes.  The M, after some time, leads her to think her name is Marianne, and Daniel tries to get help for her, by going to the French consulate but they don't seem too interested in her plight. One doctor he takes her to tells him that the bump on her head probably didn't cause her amnesia, but rather that she was either "already suffering from nervous problems," or "it was the shock of the accident" that may have triggered it.

As the two spend more time together, they grow close and fall in love.  She is something new for Daniel -- a woman completely without a past, which makes the love he feels for her even more special than it may have been in a "normal" situation.  He is happy, she is happy, and he envisions a future with this woman, unable to picture himself without her. She can't envision herself without him now either, and extracts from him a certain promise (which I won't go into here but keep it in mind when you get to it) that lets him know how she feels.  He's so into her that he doesn't really care if he ever finds out about her past -- at least that's what he says.

But there's a problem.  Finding out who she really is becomes paramount when Daniel is invited to go to America to exhibit his work, since he doesn't want to go without her; without any form of ID papers, it's impossible for her to go with him.  As he notes,


"...I'm going to discover your identity because that is what we have to do"

because "officially", she must "become someone."  But first he has to return to France.

That is about all I'll say about this book, except for the fact that it's at this juncture where my pages started getting flipped with a vengeance, and where my house could have burned down while I was sitting on my sofa and I wouldn't have noticed. I'll also say that when Daniel tells us on page 100 that "Even Zola never dreamt up a story more sordid than this," he wasn't joking.


It's interesting that Dard makes Daniel a painter, and that at the beginning just after he'd brought Marianne back to the Casa Patricio he spends a bit of time talking about the "canvas rectangle" where he rules "like an absolute master."  A bit later he talks about the canvas as a "window from which the most disturbing metamorphoses may emerge," and given what happens in this story,  it's a great metaphor that works nicely throughout the novel.

The Executioner Weeps can be read as a nerve-wracking tale of one man's journey into deepening despair and desperation, and you are there in Daniel's head as things become dark,darker, and move on into the territory of bleak before all is said and done -- making it my kind of read.  Don't blow it off because it was written in the 1950s -- as tragic and dark as it is, this is a great story.