Kill the Next One, by Federico Axat 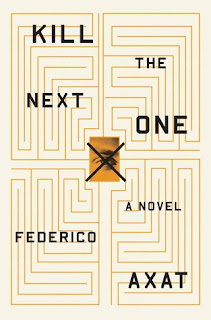 "Open the door. It's your only way out."

As soon as I turned the last page of this  novel I had to question (once again) the publisher's decision to a) change the title and b) come up with a dustjacket blurb that hardly matches what goes in in this book.  I'm afraid I don't understand either, since when all is said and done, the original Spanish title is much more reflective of the nature of what happens here and the blurb is sort of misleading re the story as a whole.  I'm not surprised that so many readers were frustrated with this book, since they were expecting one thing and got something completely different.  I bought this one based on the fact that it's a crime novel from Argentina more than for any other reason -- I love translated crime, and I especially like to try out the work from authors who are new to me.

Let's get back to that blurb, referring to the main character of the story, Ted McKay, who as the novel opens, is on the edge of shooting himself in the head to end it all.  He's at home,  locked into his own study; his wife Holly is away on vacation with their two daughters, and he's even been thoughtful enough to leave a note telling Holly where he's left the key to the study and not to let the kids in after she opens the door.  As he works up the courage to shoot himself, a "barrage of shouts and banging" at the door draw his attention, and he knows that "he'd have no choice but to see what it was all about."   He opens it to find a man he doesn't know standing there, but strangely, the man, who gives his name as Justin Lynch, somehow knows Ted's name. Ted slams the door closed once again, but Lynch is persistent and through the door  reveals to Ted that he knows what he's about to do with the gun, and if Ted would open the door, he promises not to try to stop him. After a bit of time, Lynch comes right to the point and


"...makes him a proposition: why not kill two deserving men before dying? The first target is a criminal, and the second is a man with terminal cancer, who, like Ted, wants to die."

The tradeoff for Ted is that


"after executing these kills, Ted will become someone else's next target, like a kind of suicidal daisy chain."

It's an idea that Ted doesn't necessarily dismiss and he even goes as far to work out a plan but, of course, things don't exactly work out in the way he (or we) expected, diverging in a very, very big way.  That bit of plot  will come back much later, but in a hugely different fashion that allowed for an "aha" moment by the time I got there.  I can't really go into too much detail here because saying pretty much anything would constitute a major spoiler and ruin the reading experience, but the point is that while we actively start with the blurb's premise in mind, it turns out that that's not really the story at all.

Kill the Next One messed with my head for quite a while, because it is one of those stories where things seem to make sense and yet they don't if you are reading carefully; things tend to move and change quickly here making it even more of a head scratcher.  Even as things start to become a little clearer, it's like being in a gradually-lifting fog where you can sort of make out shapes but you know that your vision is still a bit distorted; it isn't until the very end that everything comes into focus.  The enigmatic in any novel appeals to me; this book is like one giant puzzle where pieces are gradually filled in but there is still a lot of space on the table before the full picture emerges.

It's neither a great nor perfect book by any means with character issues that crop up,  lengthy, sometimes over-the-top scenes that could have been pared down quite a bit to give the story more punch, and it seems to me that there were still some things that could have been a bit more fleshed out (especially considering the real story underpinning everything here)  but even with its issues,  it has a sort of eerieness about it that made it a worthwhile, page-flipping, and entertaining read that I had trouble putting down.

My advice to potential readers: don't look at reviews that give away the show because as you move away from the expected into deeper, darker territory, you really don't want to know beforehand what's coming at you -- it will totally ruin things. While I've seen it referred to as a thriller, it really moves into that territory only toward the end; before that though, it's much more in the psychological category, but even that may be saying too much about it.
Posted by NancyO at 10:53 AM