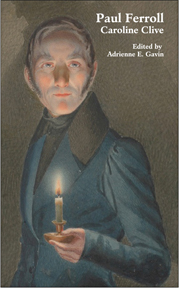 First things first: anyone who loves old mystery/crime novels should check out Valancourt Books -- they are my favorite small indie press and they specialize in obscure or forgotten titles, perfect for die-hard bookworms like me who prefer works published in the past. I'm very sure  that other people don't get as worked up as I do about finding new old authors to read, but it's something that's quite meaningful to me so it's a big deal. So many male writers from this time period have names and work that have never been forgotten or have yet to lapse into obscurity, but that's not the case with a huge number of female writers, especially those whose work crosses into the crime/mystery area.

Now on with the show -- I discovered Paul Ferroll while reading Kate Watson's Women Writing Crime Fiction 1860-1880.  Watson notes that Paul Ferroll is  "further evidence of women writers challenging convention and contributing to the nascent crime and detective genre." (23)  Caroline Clive (1801-1873) was a British poet as well as novelist; she published her first book, a volume of religious essays in 1827 under the pseudonym of, oddly enough, Paul Ferroll.  Her second book, a collection of poetry, was published in 1840 under the name of V.; Paul Ferroll was her first novel, followed by another (which I'll also talk about here) in 1860. As the Oxford Dictionary of National Biography tells us, accidents in 1860 and 1863 left her confined to a wheelchair before she suffered a stroke in 1865; two days after sustaining injuries from her dress catching on fire in her library, she died in 1873.

When Paul Ferroll was first published, it was both praised and condemned by critics. According to the introduction in this edition, its earliest reviewers thought it had "power and originality," while at the same time found fault with its "subject matter and lack of moral comment."   Watson reveals that writer Elizabeth Gaskell was an advocate for this novel; another scholar reveals that she had written a letter to Louis Hachette in France recommending it as a "work of fiction of remarkable merit."  She also noted that in Britain, "People here condemn the book as the work of a she-devil," but that they were buying and reading it to the point that within six weeks, another edition had to be published.   According to one scholar who got her information from Desmond Flowers' A Century of Best Sellers, 1830-1930, Clive's novel went on to become "the British Bestseller of 1855," along with Westward Ho!, by Charles Kingsley.  For the most part, largely outside of academic circles, Paul Ferroll  has joined the ranks of other obscure, long-forgotten books that somehow rarely (and sadly) see the light of day any more.  One more thing -- in terms of this novel's placement in terms of early crime writing,  Lucy Sussex says in Women Writers and Detectives in Nineteenth-Century Crime Fiction that

"Despite Paul Ferroll's success, in writing a detective-less novel Clive was working against the trend. During the 1850s the sleuth would increasingly occupy the centre of the text."

I found the character of Paul Ferroll to be pretty odious -- in modern parlance I thought he was a major jerk; but then again, I'm sure that Clive was leaving it to the reader to decide just what sort of person he is because every so often he has his moments of redemption, most especially toward the end of the novel.   What starts out quite peacefully with a picture of the "calm loveliness" falling over the Ferroll country home of the Tower of Mainwarey is interrupted with  Ferroll being summoned home with the news that "Your lady has been murdered," and indeed, she'd been found with her throat slit.  By whom was never really discovered, since the gardener, Mr. Franks, who'd been accused of her death was acquitted.  Ferroll gives Franks and his wife money to emigrate to Canada, after which Ferroll disappears for a "good while,"  only to return with new wife and "a little toddling child in tow."  As Janet, the Ferroll's daughter, grows into young womanhood, Ferroll remains aloof from his neighbors, ignores his daughter and actually seems to resent her presence in his home; it often sounds like he would have preferred it to have been just he and his wife Elinor living together. Neglecting Janet doesn't necessarily mean that he steps out of her life; he steadfastly refuses to allow her to have a relationship with the one young man who idolizes her, and fails to accompany her to social gatherings.

Ferroll is considered an upstanding member of the community to the point where even when he is found guilty of murder after shooting and killing one of the ringleaders of a worker's riot, he receives a pardon. Time passes while the family spends time in France, and things are going pretty well for the Ferrolls until Mrs. Franks decides to return from Canada and is found with some of his dead wife's jewelry, at which point things take a rather strange turn.  For me, it turned out to be one of those stories where all you can do is to guess at the motivations behind the main character here, since right up until the last few pages, there is absolutely no clue as to why he does what he does.  It's frustrating, but it pays off.

The ending of this novel caused no end of consternation, and it was likely because of this reason that Clive felt the necessity to add a "concluding notice" to a later edition of the book.  As Lucy Sussex states,  the book was " ... outrageous for the time." As she notes,

"It lacked sanctimonious moralizing, then almost compulsory, as authors justified their satisfying of the popular demand for thrilling crime." (65)

Clive, whom Sussex notes as being "sensitive to audience reaction," ended up writing a prequel to this book in 1860 that sets the scene prior to Ferroll's wife's murder.  In doing so, Sussex believes (as do I) that Clive managed to retreat "from the apparent amorality" at the end of Paul Ferroll by offering an excuse as to why the first Mrs. Ferroll may have been killed.  We know from Paul Ferroll that she was an awful person, but after having read the prequel, I can solemnly swear that the woman was a nasty piece of work, pulling out all the possible stops in order to have her way.   I'm leaving the title of that particular book out of this post -- anyone who may be interested can find it through any of the links above, but beware -- all of the names have changed with only one exception -- and considering that Paul Ferroll's name appears in the title of that book, well, one would expect to find a character so named, but even his name has been changed. Don't let it throw you off -- while that book isn't nearly as well done as this one, it's still worth reading.

My advice for anyone who may consider reading Paul Ferroll is not to read anything that gives away the complete plot of this story because really, the fun here is in getting to the end of the book.  It's extremely tame in terms of modern-day crime reading, but once again, it was worthwhile because it was a good story and more importantly, because I've unearthed yet another author I'd never heard of before.