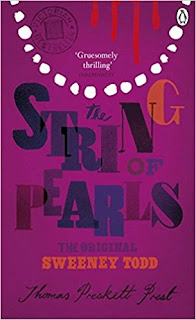 Closing out my time in the 1840s I've come to the Penny Dreadful (aka "blood"), which started life in "eight-page, double-column installments," according to The Longman Companion to Victorian Fiction.  This book, The String of Pearls, was, according to E.S. Turner in his  Boys Will Be Boys, originally serialized by Edward Lloyd in 1840, but others have placed its origins in 1846,  in Edward Lloyd's  The People's Periodical and Family Library, where it lasted for eighteen installments.  While authorship was attributed to Thomas Preskett Prest, there is some debate to who actually wrote it, which you can read about here in an article by Helen Smith or at the OUP Blog, in a post written by Robert Mack.  Whatever its provenance, this book gave me some of the finest hours of pure reading pleasure.

Penny Dreadfuls were immensely popular among boys, so much so that as author Kate Summerscale notes in her The Wicked Boy: The Mystery of a Victorian Child Murderer, the press had labeled them as "the poison which is threatening to destroy the manhood of democracy."  In her study of Robert Coomes, the young 13 year-old boy who decided to kill his mother one bright sunny day before taking his little brother to a cricket match, the influence of the penny dreadfuls on young minds was cited as one possible reason he may have committed such a dastardly crime.   In fact, once again according to The Longman Companion, in the late 1880s,


"the depraved quality of juvenile reading matter sparked off a middle-class moral panic."

and in a post by writer Mimi Matthews, she also notes that the suicide of a 14 year-old was also blamed on the penny dreadful, on which he spent "about a shilling a week."

This all makes for fascinating reading, as does the debate about the true authorship of this book, but it's the novel I need to get on with now.

The String of Pearls is, as I said earlier, just plain fun, if a story about murders, cannibalism, and a demented barber floats your boat.  It certainly did mine, not so much for those elements but more because there is an actual plot here in among the more gruesome parts. Set in London in the 1780s, the novel begins with a certain Captain Thornhill coming into Sweeney Todd's barber shop for a shave and never being seen again.  All that remains is his dog, who refuses to leave the outside of the shop, still waiting for his master. Thornhill had been on his way to tell young Johanna Oakley that Mark Ingestrie, the man she loved, had been lost at sea; his other mission was to hand Johanna the string of pearls entrusted to his care by her now missing lover. One of Thornhill's friends, Colonel Jeffrey, notices the dog there, making him suspicious enough to want to get to the bottom of Thornhill's disappearance. For this he will need help, and it is the faithful, broken-hearted Johanna who steps up to the plate.

However, as that particular plot is working itself out to its end, it's Sweeney Todd and what happens inside his barber shop that really takes center stage here. One particular storyline follows Tobias, his young shop assistant, who figures out what's going on after he gets the chance to search Todd's living quarters one day while his master was out.  He realizes that Todd is up to no good when he discovers and recognizes a number hats and walking sticks belonging to Todd's victims;   he would rat him out to the police except for the fact that Todd holds the threat of blackmail over him having to do with Tobias' mother.  When Todd finally cottons onto the fact that Tobias is a liability, he sends him to an asylum where he'll be shut away for good, or worse.  While all of this is going on and as Todd welcomes more customers to his lethal barber chair,  there is, of course, Mrs. Lovett and her pie shop.

Mrs. Lovett has a large number of "enthusiastic admirers" who find her pies so tasty that they eat them until they're "almost ready to burst."  Her reputation for "delicious pies" had "spread far and wide," and every day at noon "there was such a rush of the legal profession to obtain them."  As we're told,


"...there was about them a flavour never surpassed, and rarely equalled; the paste was of the most delicate construction, and impregnated with the aroma of a delicious gravy that defies description. Then the small portions of meat which they contained were so tender, and the fat and the lean so artistically mixed up, that to eat one of Lovett's pies was such a provocative to eat another..."  (36)

She has very low overhead in terms of the meat for these pies; she also has a cook for whom the phrase "chained to a stove all day" is an understatement.  The reader knows all, but it's going to be a shock for her customers when eventually the truth is made known.  I can just imagine this book playing out in installments, with readers beyond willing to fork out their pence or shillings to find out what could possibly happen next. I would love to have been around when the contents of Mrs. Lovett's pies were finally revealed ...


Here's the thing. I read this book primarily as an example of the penny dreadful, and I have to say that looking for any sort of literary merit here is pretty much a waste of time.  While it's a great example of what the working classes were reading, and while you can catch a lot of negativity among the poor for the upper classes and the use of mechanization throughout the story,  it should probably be read just for fun.  Storylines tend to be dropped as do a few characters here and there, and the major focus is actually on the bad guys in this book.  It's melodrama pure and simple, delightfully gruesome, and as I said, it is a book that gave me hours of pleasure while reading.

Just to be clear: I've seen the play, I've seen the 1936 film based on this book, and I've seen the BBC adaptation (which is also quite gruesome and should not be watched while eating lunch as I discovered), and this, the original,   is as different from all of its adaptations as it can possibly be. So when readers complain that the play is better and the book did nothing for them, well, they're comparing apples and oranges.

This book would be perfect for anyone looking for a good, old-fashioned escape read or a novel to relax with over the summer while at the beach or hanging out poolside.  It goes very quickly despite its hefty length, and it's great fun.