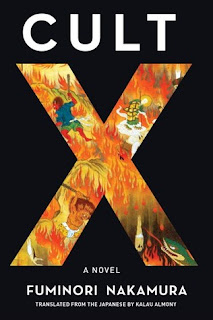 hardcover
The key word is patience with this novel; my own was sorely tested more than once but in the long run, once you get what's going on underneath all of the action here, it's definitely worth the read.  I'm going to just spit this out -- I've enjoyed other books by this author much more than I did this one; for example, his The Thief is the novel that kept me buying books by this author;  Evil and the Mask is just plain great,  and Last Winter We Parted  is also excellent.  Then again, Cult X takes a decidedly different turn than Nakamura's other books, so it's sort of unfair to line it up with its predecessors.

As the story begins, Toru Narazaki is at a bar with another guy, Kobayashi, who we learn very quickly is a private investigator.  It seems that Kobayashi was hired to find a missing woman by the name of Ryoko Tachibana, who had


"vanished from Narazki's life, who had hinted at suicide and then disappeared."

Some weeks earlier, he'd seen her, but rather than actually talk to her, he opted to tail her, and she'd led him to an old apartment building.  Now she's gone again and Narazaki is looking for her himself. One thing he knows for sure is that Ryoko had been part of a group that "seemed to be some sort of religious organization," though not registered as such. He makes his way to the mansion where the group meets with a plan to "pretend I'm interested" while asking questions about the missing woman "a little at a time." The group is headed by Matsuo, whose group is focused more on eastern philosophical teachings and pondering such questions as "Is there a god?", not at all the "religious fringe organization"  Narazaki had imagined.  He also realizes that it was likely that the missing woman wouldn't have been "involved with this kind of group" and wonders why she "had to vanish."  But we learn something very interesting here as well, which will have a bearing on later events:  he'd actually

Eventually he is led by a woman in the group claiming to know Ryoko's whereabouts to a sort of rival group without a name, known only as Cult X. The journey there was strange enough, complete with sheets over the car windows so he couldn't know his final destination, but once he gets there, he finds a group that prefers more earthly, fleshly matters to those connected to the spiritual.  It isn't too long until Narazaki is taken under the wing of the leader who tells him somewhat cryptically  "I need you."   It's here that things truly begin in earnest; it is the beginning of a what could become a long descent into hell.  And then, there's a revealing twist to look forward to about the leader himself....


The barebones outline here might lead you to wonder why there are over 500 pages if that's all there is to it, but trust me, I haven't even begun to approach what's in this book.  For one thing, there are Matsuo's lectures, which reflect how his approach to the philosophies he's teaching stem from an earlier period of his life.  In contrast with the peaceful, soul-searching approach taken by his group, we also come to understand why the leader of Cult X has chosen his way, with stories also linked to his past.  Contrasts also appear in the members of each group, which also lead to an understanding of why people would be so willing to join cults in the first place.   All of that is wonderfully done, and weird person that I am (and it also might have something to do with the fact that I had a minor field of religious studies with an emphasis on Asian religions and philosophy), I actually enjoyed the backstories and the lectures much, much more than the elements that eventually turn this book into a thriller; having said that, I did find the story of the leader of Cult X kind of long in the telling.  But what I enjoyed most was the focus on religion and nationalism, and what Mr. Nakamura has to say about predatory capitalism,  because he's totally spot on.    Reading what some other readers thought about this book though, I see I am somewhat of the lone stranger here in that sense.

I also have to give space to parts of the book that seriously infuriated me.  My biggest issue is that while I understand sex is a commonly-used tool of submission in many cults, a point that is hammered home here again and again, do we seriously to be witness to a rape, or do we really need six and a half pages describing wet lady parts, finger sucking, etc. etc.?  I mean, jeez, I'm not a prude and sex is part of most novels these days, but I found it all to be so unnecessary.    One more thing: I'm not a huge fan of thrillers because usually some of the elements involved are pretty out there, and I found that to be the case in this book.   And while I could buy some of the thriller elements here, and I did get somewhat caught up in the building suspense, there was one part of the plan in particular that was just too much, that made me do the internal eyeroll while thinking "yeah, like that could happen," with the sarcastic tone very loud in my head.  However, I did think that the author made his point about why people are drawn to extremism, and did an excellent job of it.

I will recommend this book, but a) prepare to be in for the long haul and b) beware of the male-dominated mindset that permeates Cult X that is not at all pretty.