The Blue Room, by Georges Simenon 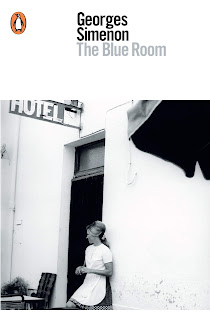 "How could he have guessed that this scene was something he would relive ten times, twenty times and more -- and every time in a different frame of mind, from a different angle...?"

A hot sunny day in August, a hotel room, and two people have just finished making love, "bodies still flushed with sensation and minds slightly dazed."  Caught up in his own sort of post-sex floatiness, haze, afterglow -- whatever you want to call it -- Tony Falcone is dabbing at the blood on his lip where his lover/mistress over the past eleven months, Andrée Despierre has bitten him, barely listening to her and quietly responding as she asks him a series of questions, words that to him "hardly mattered," since for him, "They were talking for the pleasure of it, as one does after making love..."  and


"Right now, nothing seemed important to him -- he felt good, in tune with the universe."

Still in this frame of mind, where "only the present mattered,"  halfheartedly listening to Andrée, she asks him if he could really spend the rest of his life with her, and he, in a non-thinking sort of way answers "Sure..."  But his happiness is interrupted when looking out the window overlooking the Place de Gare in the town of Triant, he sees something that causes him to grab his clothes, run out of the room and head to his car -- Andrée's husband Nicolas, who is heading right for the hotel.  It may seem that Tony's managed to escape, but in reality, he's already trapped in a nightmare. He just doesn't know it yet.

However, we know that something has happened just three pages in as Tony describes a "psychiatrist appointed by the examining magistrate" asking him questions about that day, and "studying his reactions."  It's that series of questions, the conversation between Andrée and Tony that he is asked to remember, but why we don't exactly know.  It is that scene which he will be called upon to "relive ten, twenty times and more -- ... every time in a different frame of mind and from a different angle." And indeed, the conversation crops up several times throughout this story, and as we begin to learn what has happened that puts Tony in front of an examining magistrate, it takes on more meaning each time.

But Tony, who is married to a wife he loves and has a young child, struggles to make everyone understand about his affair with Andrée and the blue room, where for him,


"nothing was real. Or rather, its reality was of a different nature, incomprehensible anywhere else."

Outside of that space they'd never been a couple; as he says, "they were an 'us' only in a bed" there.  For him, their lovemaking was intoxicating; both shared "an animal pleasure" he'd never known with any other woman.  She is, to Tony, the fulfillment of his sexual desire and passion.  But more importantly, as things progress, we hear from Tony that no one can really understand the present without an understanding of the past.  As he says,


"They thought, all these people in Poitiers, policemen, magistrates, doctors, even that unnerving lady psychologist, that they were going to establish the truth, when they knew nothing about the Despierres, the Formiers, and so many others who were important in their own ways."

As in most of his work, Simenon launches us quickly into the past, which ties directly to the present while the principals try to get to the truth.  But we are quick to learn that truth here isn't exactly absolute -- although Tony tries to be as honest and candid as possible, past and present circumstances are "True and false, like all the rest of it."   But the author does something more here, taking us beyond the past and present into the future, and does it so skillfully that it just becomes part of the flow even as he makes the shifts.

With Simenon's gift for detail, his focus on human nature and his characters, his ability to produce a sort of claustrophobic atmosphere that only becomes more confining as time goes on, and his excellent economy of prose where every word, every phrase is carefully measured and never wasted, The Blue Room  offers an intense study of a man who unwittingly creates his own hell and becomes trapped, with no possibility of escape;  as he is continuously questioned, he is also forced to face his own role and his own responsibility for what has happened.

The length of this book might fool you into thinking that you can buzz through it in a day, but don't do it.  There is so much going on here and it needs to be given your utmost attention because everything, and I do mean everything in this story matters.  I did about 40 pages per day just to absorb it all, and even after a second read, I'm sure there's much more that I could get out of it.  It is, quite frankly, genius writing, but then again, most of Simenon's books are.

Beyond highly recommended, especially for readers who want a challenge and who want to take the time to get underneath what seems to be a fairly cut-and-dried story. Trust me -- it is anything but.