The Syndicate, by Clarence Cooper, Jr. 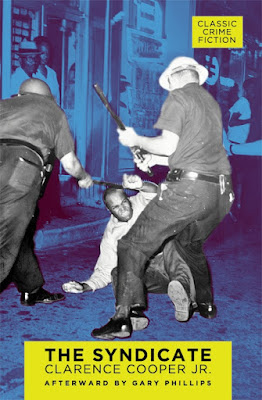 paperback: my many, many thanks to  Dominic Stansberry at Molotov Editions for my copy of this book.


"It was no use trying to get around the facts: something was wrong with me. And whatever it was was scary as hell..."


June 15th, three days from now, the small press Molotov editions will be releasing The Syndicate, by Clarence Cooper.  It's highly likely that regular readers of crime fiction have never heard of Clarence Cooper, who wrote this book in 1960 under the pseudonym of Robert Chestnut.  He had written another book prior to this one, which, as the back cover blurb reveals, "was a literary sensation."  The Syndicate, however, was seen as "too raw,"  a negative that would have been "possibly damaging" to Cooper's writing career, hence the name change.

Clarence Cooper has also been neglected among scholars of African-American crime fiction,  because even in a quick survey of four different reference books I have that pertain to the topic,  Cooper's name turns up in only one.  And even there, in Justin Gifford's  excellent Pimping Fictions: African-American Crime Literature and the Untold Story of Black Pulp Publishing, Cooper is acknowledged only as one of a "number of black crime fiction authors who were contemporaries of Chester Himes," who have "remained off the radar of most literary and cultural scholars" (180).   That is a shame, really, since if The Syndicate is an example of what came out of this author's head, he should be much better known than he is, by readers and especially by scholars in this field.

Definitely not for the faint of heart, The Syndicate is beyond raw, reaching down into the grittiest depths of darkness as it pulls us into the mind of an extremely troubled and damaged man, Andy Sorrell.  He's been called on by his boss to take care of three men who have double crossed "the Syndicate," an organized-crime group out of New York.   Andy will be paid ten grand for his work, once he finds these crooks who had  made off with half a million dollars "rightfully" belonging to the Syndicate after a "bank job" in New Jersey.  He is then supposed to recover the money and return it to his boss.  After making his way to the coastal town of Hollisworth,


"... a solid little city, with the exception that it belongs to the syndicate, lock, stock, and barrel"

complete with crooked cops, Sorrell begins his quest at his contact's club where he literally beats the information out of a stripper,  Tina, who knows the whereabouts of one of the men he's looking for and won't talk.   Afterwards, he has a moment of regret for hurting her, but he has to focus on his targets.

His anger at Tina actually has very little to do with his anger over her not talking, but stems from the death of his pregnant girlfriend, Carolyn.  As Sorrell reveals, it was Tina


"so closely resembling Carolyn, that's what got me. She had not right to look just like her, or to say those things like Carolyn might have said! No right!"

Sorrell is constantly haunted by Carolyn.  Early on in the story he hears her talking to him, her voice coming from the sea, telling him that he's "horrid and brutal and a murderer."  She also tells him that when he kills, he's killing "more than one person."  As she puts it,


"You're trying to kill that thing within you."

Exactly what "that thing" inside of Sorrell is is fleshed out more as the story goes along, but it's evident early on that Carolyn's death two years earlier has wounded him to the core and it has played havoc with his mind.

The Syndicate is a twisty, brutally dark novel.   It is one of those stories where it's difficult to know who is telling the truth or who is trustworthy, since betrayals abound.  Although it's laced with violence that is hard to read at times, the plotting, the pacing and the story are all solid -- not a misstep anywhere.  Yet, aside from the plot it's what's happening within that is utterly fascinating.  We find ourselves inside the mind of a brutal killer, who knows that there's something wrong with him, and that whatever it is,


"it was getting closer and closer to me, ever since two years ago and Carolyn."

I think it's this mix of Sorrell's battles with his own inner demons and the external forces that for reasons I won't spill here want to keep him from finishing the job he's been sent to do that makes this book unique in a big way.  It's definitely not just another dime-a-dozen, enforcer-goes-looking-for-who-screwed-the-mob sort of novel -- it's the author's simultaneous attention to what's going on inside of Sorrell that elevates this book to an entirely different level.

I'll be honest here -- The Syndicate is not an easy book to read because of some of things that happen between its covers;  there were times when I had to put the novel down for a while because of incidents of brutality against women that crop up a couple of times.  However, looking at it from the point of view that there is something in Sorrell's psychological makeup that causes these things to happen makes it a bit more easy to deal with on an emotional level.

This lost crime classic that is about to reappear shortly is well worth the attention of any crime fiction reader that enjoys dark, deep, and gritty -- the back cover likens him to Jim Thompson so that pretty much tells you what you need to know regarding what you might be getting into here.

One final note:  there is an excellent article about Clarence Cooper Jr. at The Guardian , where author Tony O'Neill notes that with some of his books coming back into print, "Clarence Cooper Jr., ignored and reviled in his own lifetime, is gradually being recognised as the great American novelist he is."  Let's hope that's the case, and let's also hope that there will be more of his books made available in the near future.  I hadn't even finished this book before I went and bought his The Farm. and my hat is off to Molotov Editions for bringing this novel back into print and rescuing it from its current state of "pulp oblivion."