Hunting Charles Manson: The Quest for Justice in the Days of Helter Skelter, by Lis Wiehl with Caitlin Rother 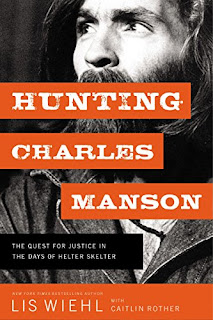 (arc: my copy from the publisher -- thanks!)

Next year it will have been fifty years since the grotesque murders that shocked America were committed by members of the Manson family.  Although five decades have passed since these killings, interest in Manson and his people hasn't waned a bit -- there are numerous books, websites, movies, tv shows, podcasts, and blogs that have captured public interest and will probably continue to do so long after the fifty-year mark has passed.   And now there's another book on the topic that is about to make its appearance, Hunting Charles Manson, written by Lis Wiehl, a very well-known legal analyst, attorney, author and reporter, along with Caitlin Rother, author, journalist, and noted crime expert.  It is the first book in a planned series of what are being called "nonfiction thrillers" that take a close look at "the awful crimes and acts of terror" of some of the worst criminals ever.

Briefly, Wiehl and Rother, who spent countless hours going through a multitude of sources, sitting through interviews and sifting through evidence with "fresh eyes," begin by taking their readers back through time before the Tate-La Bianca murders in 1969, introducing us first to "Charlie the Guru," where we learn that he "began collecting impressionable young women, one at a time," since his parole in 1967.   It also seems that between his release in 1967 and 1969, he had managed to completely con the Los Angeles federal probation office and everyone else up to the US Parole Board in DC, and nobody had the foggiest idea of "what he was up to", including his regular probation officer with whom he would meet repeatedly.  Even though during his meetings with his PO he admitted to several arrests for "minor offenses,"  nothing was done regarding Manson violating his probation until 1969, after the murders had occurred and Manson was hiding out in the desert, out of reach of the authorities.  As the authors note, had someone paid more attention and picked up Manson sooner for even one of these violations,  his nine victims might still be alive.   The story continues on through the investigations into the murders of Gary Hinman, the horrific killings at the house on Cielo Drive, and the La Bianca murders; it also takes us through mistakes made by the Los Angeles police and the LA Sheriff's Department (failure to coordinate information, or to even see patterns connecting the murders even though the press pointed them out),  the arrests and information that led to the trials, and finally on into the sentencing and the parole hearings, and the lingering effects on the families left behind.  The authors also examine various theories that were rejected in favor of the "Helter Skelter" motive that ultimately had its day in court.

Considering that this book is the first in a series that examines the cases of some of the worst criminals in the world, I think it's fair to say that readers expecting a new,  in-depth, minutely-detailed account of the Manson Family and their crimes should realize that this book doesn't really go there.  One reason they give for writing this book the way they do is to  "bring readers to the present day with as much new information as possible,"  so that they can "tell the story afresh, not rehash the prosecution's narrative as relayed by Vincent Bugliosi in Helter Skelter."  They manage this very nicely, in part, by examining a number of factors that collided within this group of people such as mental illness, the use of hallucinogenic drugs, and most especially the vulnerabilities in the lives of the young women and men  who were involved with Manson that allowed him to gain so much control over their lives.  We still may not grasp the "whys" of it all, but the story as related here by these two women still has the power to chill even though it all happened nearly fifty years ago.