In the early 1890s, a woman in Austria who had only started writing crime in her 40s introduced a new detective, Detective Joseph Müller, a very different sort of sleuth than his British contemporary Sherlock Holmes.   His first case, "The Golden Bullet," revealed that Müller is a policeman with a heart; a man who, if he sees something worth salvaging in a criminal, he is likely to "warn his prey, once he has all proofs of the guilt and a conviction is certain"  ("The Golden Bullet", Vol. 2, 305).  His superiors despair; they know he is an excellent detective, who is "without a peer in his profession," but his "weakness" doesn't sit well with police authorities.  Strangely enough though, his talents are so valued by the very institution that won't take him on full time that they often hire him privately when a "particularly difficult case" arises.  Luckily for Müller, this very last case in his "public career" left him a man of means, because his boss had to let him go; he becomes, as the back-blurb reveals, "a member of that secret and shadowy organisation," the secret police.

It is incredibly difficult to find out much about Auguste Groner (1850-1929), which is strange, as a) she has been labeled, as Leslie Klinger tells us in his In the Shadow of Agatha Christie (2018), the "mother" of Austrian crime writing,   and b) her Müller stories remained popular for about 30 years. Even the review of Klinger's book at Open Letters Review neglects to mention her, while instead focusing on Australian and British women authors.  I went though my own collection of nonfiction books about crime writing including Barzun and Taylor, Haycraft, and even Lucy Sussex's Women Writers and Detectives in Nineteenth-Century Crime Fiction: The Mothers of the Mystery Genre, and there is nothing written about this woman.  The only time she's even mentioned in any of my books is a brief bit in a paragraph by Stephen Knight in his Crime Fiction Since 1800: Detection, Death, Diversity (2010) where he lists Groner's name (here Grüner) among contemporaries of writer Carolyn Wells, "who are now quite forgotten." (82)  Internet searching brings up little, so we just kind have to roll with what we've got, which is not much. 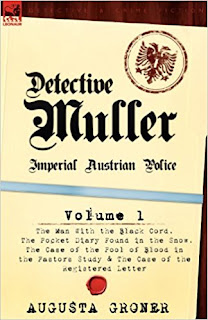 Volume 1 of this "special two-volume collection" (so named by the publishers), introduces Müller before launching into four of his cases: "The Man With the Black Cord," which is actually novel length; "The Pocket Diary Found in the Snow," "The Case of the Pool of Blood in the Pastor's Study," and "The Case of the Registered Letter."  My pick for favorite in this lot is the first story, as it involves the disappearance of an elderly man right out of his own bedroom, a truly-impossible situation; an old house, an inheritance, a strange neighbor, and of course, it is a great introduction to the detective, who, as we learn here knows exactly when and what to say to a villain that "gave him his power to touch the heart of even the most abandoned criminal."  We also see him at work, learning how he plies his craft -- including using a disguise, hiring a would-be prisoner as an assistant, and lots of foot time.   My least favorite story was "The Case of the Registered Letter," but the others are challenging little puzzles that left me scratching my head, wondering how the heck our erstwhile detective was going to figure them out. 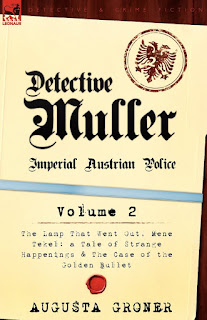 Volume two offers three stories: "The Lamp That Went Out", "Mene Tekel: A Tale of Strange Happenings," and ironically, the last story is actually the author's first Müller tale,  "The Golden Bullet."    The first story involves the death of a stranger, found in an area of Vienna "known to be one of the safest spots" in the city.  "The Golden Bullet" is a locked-room/impossible crime mystery, in which the murder of a prominent man drives Müller to appeal to the criminal in a most unusual way, one with which his superiors do not appreciate.   My favorite in this volume is the second story, "Mene Tekel: A Tale of Strange Happenings," which actually reminded me much more of an old, pulpy adventure tale leaning a bit on the edge of sci-fi.  Here, Müller is called upon to watch over a Scandinavian scientist (without him knowing, of course), as he sets out on a journey to test his newest invention.  This story will take the reader from England to the ruins of Babylon before it's all over, with plenty of surprises all around.  Where all of the other stories in both volumes fall more along the traditional lines of whodunits, this one requires some suspension of disbelief, and it would certainly not be out of place in an anthology of archaeological adventure-pulp fiction.  I have a deep and abiding fondness for that very thing, so this story was right up my reading alley.   Other readers may not be as happy with  it as I was, because in more than one way it roams headlong into the valley of sheer farfetchedness (I know that's not a word, but it works), but its difference from every other story in this collection (and my keen love of the strange) was the biggest draw here.


Some of Groner's Müller tales are available online and in e-reader crime collections here and there on Amazon, but as someone who prefers the feel of book in hand, I'm grateful to Leonaur for publishing  this two-volume collection of her work.   I'll look forward to hopefully finding more of her work translated into English -- Auguste Groner is sadly neglected by modern crime readers, which is an absolute shame.

recommended for readers who enjoy discovering the work of forgotten female writers, as well as people who enjoy early detective stories that feature a different sort of sleuth.  I personally thought these books were wonderful.