A Shilling for Candles, by Josephine Tey -- a reread 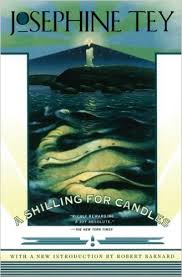 Having just recently finished Jennifer Morag Henderson's excellent biography of the author,  Josephine Tey: A Life (which I'll be talking about here very shortly),  I find myself completely in agreement with her -- the more a Tey reader understands about her life, the easier it is to appreciate  and to understand her work.  I wish the biography had come out sooner; now I feel like I ought to go back and reread more of Tey's crime novels for better perspective.

A Shilling for Candles begins with the discovery of a body on the beach. At first the young woman's death is assumed to be suicide, but based on his observations and an important clue left behind, Inspector Grant from Scotland Yard thinks differently. This should be an easy mystery to solve, since Grant has a ready-made suspect, but that person ends up fleeing.  While the suspect is being hunted, Grant realizes that there are many odd things about the death and life of the dead woman that need to be investigated, but trying to keep things quiet turns out to be impossible since the deceased is popular film star Christine Clay, who had gone into hiding to get away from the world. To say that this is a complicated case is an understatement.  While the hunt is on for his main suspect, Grant finds himself having to examine different lines of inquiry that move him into the shallow world of celebrity, the dead woman's personal history, religious strangeness,  and they even take him into the realm of out-there astrology before the truth is at last revealed. And I have to say, I seriously didn't see that ending coming -- a complete surprise.

Getting back to why knowing something of Tey's life helps to put things into better perspective as a reader,  as I read A Shilling for Candles, I could easily see how much of Tey's experiences had an impact on her character creations.  As just one example (without giving anything away),  Tey had made lifelong friends among a group of women in the theater world, women she'd come to know in her work as  playwright Gordon Daviot.  One of these women was Marda Vanne, whose fictional counterpart Marta Hallard turns up in more than one Tey novel as an actress friend of Grant's.  As another example, when Christine Clay's will is read, it turns out that she's left money to the National Trust, "for the preservation of the beauty of England."  Tey did the same in her will.  Plus, there's the added focus of the pitfalls of fame and fortune in this novel that may play off of Tey's own reluctance to be in the public limelight.

[Sidebar: Tey also worked as a screenwriter and even had this book adapted as a Hitchcock release entitled "Young and Innocent," which I will be watching this evening.] 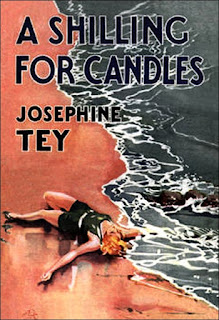 This is my second time with this book, and I got much more out of it this time around than the last, which is generally the case with me; I think the huge difference was that this time I also had more insight into the author herself.   I have to be honest -- so far my favorite of the rereads has been her The Franchise Affair -- in my very humble opinion, it's among the best of her mysteries and A Shilling for Candles doesn't rate as highly as that one.  That doesn't mean it's not good, just less enjoyable for me personally.

Recommended to people who enjoy vintage crime, but do be aware that many of Tey's ideas in this novel do not conform to modern PC sensitivities. Frankly, I don't really give a fig about whether or not a book written in the 1930s conforms to today's standards of "correctness", but I have read reader responses that include complaints about this issue, so you've been warned.  Overall -- a good read, not great, but it was fun getting to the end.
Posted by NancyO at 3:45 PM