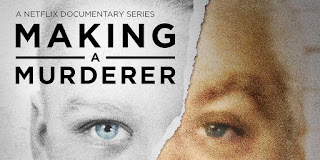 Over the last week or so,  Mr. Film Critic and I have been watching Making a Murderer on Netflix, a documentary series that is so disturbing that I

a) found myself wanting to throw things at the TV over how badly these cases were handled,
b) found myself yelling at said TV about the horrific  injustice of it all, and
c) found myself telling anyone who would listen that they need to see this documentary.

As noted by The Observer, here's the main thrust:

"First, the facts: Steven Avery of Manitowoc County, Wisconsin, was convicted of rape in 1985 and sent to prison, until DNA evidence exonerated him after 18 years served. Two years later Mr. Avery was arrested again, this time saddled with the murder of 25-year-old photographer Teresa Halbach. The problem? Well, everything. As the trial continued it seemed more and more likely Mr. Avery was, at the very least, on the wrong end of some shoddy police work. At the very worst, the murder of Teresa Halbach starts to look like a genuine frame job, a slippery slope that leads to a grand conspiracy by the Manitowoc sheriff’s department against Mr. Avery, one so sprawling and corrupt it would put True Detective first season to shame."


What you don't see in this brief summary is this: Avery was on the edge of potentially winning a lawsuit for the mishandling of his first imprisonment.  Here's the issue: things were looking very bad indeed for the sheriffs deputies involved in his first arrest and their depositions in the case were showing what idiots they actually were in terms of not even looking at other suspects, especially when another man, whose name was even passed on to the sheriff's department as probably having done the crime for which Avery was in prison, had been convicted of the same sort of crime earlier. The other guy was ignored because the cops had their eyes on Avery; ultimately DNA evidence cleared Avery after 18 years.  Sure enough, guess who was the true guilty party??? So -- here they are on the edge of a huge judgment and the insurers for the cops, the prosecutor and the judge involved were not going to cover if Avery won, so those involved were facing potential financial (and reputation) ruin.  How convenient it was, then, when Teresa Halbach turned up missing and lo and behold, her car was discovered on Avery's property, a family-run auto salvage yard.  From there things just slide from bad to worse as the same local cops (who were supposedly not even supposed to be anywhere near Avery's property because of potential bias and conflict of interest) "find" evidence that wasn't there (and since it wasn't there, it wasn't photographed)  in earlier searches performed by the neighboring sheriff's department.

I can't even begin to describe the horrors and "shoddy" doings of both the police and the DA's office  that were brought out in this series, but we were both appalled at what can happen when a person becomes a target of the local justice system and the police and prosecutors become proverbial pitbulls who won't let go, despite the lack of evidence.  It was absolutely frightening and the worse thing is that the people in the crosshairs were poor, not well educated, and probably had no clue that they had options.

I don't normally find myself wanting to scream during a television show, but this was just so gut wrenching and a real-life trainwreck of a case that I absolutely could not believe could happen in this country.  Or maybe it does all of the time and I'm just naive.