and thus we come to the end of a brilliant career ...Dark Corners, by Ruth Rendell 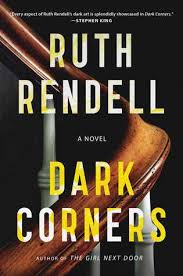 For years now Ruth Rendell and her alter ego Barbara Vine have been aiding me in my dark fiction addiction.  Her style is such that had I received this book with neither title nor author name, I could easily have picked it out as a Rendell novel.  In fact, in my opinion, even though it's entirely different,  this book has almost the same tone as her Adam and Eve and Pinch Me (which I absolutely LOVE and recommend to almost anyone who will listen).  And while I wouldn't say that this one is among the best of her books that I've read,  it is still incredibly good, still bears all of the hallmarks of a Rendell novel,  and I am beyond grateful that it was published. As usual, Rendell interweaves current social and political issues into this book in her own unmistakable way; and, as always, her characters are what drive this most disturbing psychological story.

The dustjacket blurb (in part) is as follows:

"When his father dies, Carl Martin inherits a house in an increasingly rich and trendy London neighborhood. Cash poor, Carl rents the upstairs room and kitchen to the first person he interviews, Dermot McKinnon. That is mistake number one. Mistake number two is keeping the bizarre collection of homeopathic 'cures' that his father left in the medicine cabinet, including a stash of controversial diet pills. Mistake number three is selling fifty of those diet pills to a friend, who is then found dead."

Just briefly and spoiler free, Dark Corners follows the events that launch from this perfect storm of mistakes, beginning with Dermot who seizes the moment following the news coverage of the death of Carl's friend Stacey and the resulting outpouring of public outrage.  Carl, of course, meant no harm to Stacey, but it was an innocent mistake that ultimately leads to increasingly-unbearable psychological pressure that Carl gradually finds unendurable.   Dermot (a creepy, sleazy vet tech at a pet clinic) witnesses the transaction between his landlord and Carl's overweight, overwrought actress-friend Stacey, and has no qualms about blackmailing Carl, demanding to live rent free after Stacey's death under the threat of ruining Carl's newly-launched career. Dermot is not beyond gloating to himself about the power he holds over Carl, delighting in his ability to "keep Carl exactly where he wanted him." As the pressure ratchets, Carl, who has taken to following Dermot occasionally and sees him out walking with his girlfriend,  is reminded of a phrase from his high school performance of Measure for Measure: "the duke of dark corners," but ultimately it will be Carl who is eventually backed  into a dark corner of his own.

What I love about Rendell's work in general is that a) once you open one of her non-series novels,  you find yourself in a claustrophobic environment where you can't escape the building tension and b) she is able to unearth those "dark corners" that dwell within otherwise seemingly-normal people, and she excels at that here.  Dermot the blackmailer, for example, is a regular churchgoer, never misses a Sunday service. Sex outside of marriage is something untenable for him; he even chides Carl for living with his girlfriend Nicola, saying the situation is  "far from right."  He is also  person who discovers and enjoys power, which becomes even more obvious in his relationship with his new girlfriend.  And then there's Lizzie, a friend of Stacey, who has a job and her own apartment but isn't beyond taking advantage of Stacey's death for her own purposes for the small measure of power the situation affords her.    At the same time, though, one of the  ironies of this tale is that neither Dermot nor Lizzie have that moral guide of conscience running through their heads, while Carl ... well, I'll leave it there so as not to wreck things for the next reader.

If you think about this novel as another in which Rendell explores the darkness of which humans are capable, then it is just as good of a work as many of her other books; I personally felt a bit let down by how things played out at the end, a sort of haphazard coming together of coincidence. Then again, as I noted about another Rendell novel some time back, she often uses coincidence and is aware that she's doing it so it sort of just goes with the territory. Despite that wee niggle, though, Rendell readers do NOT want to miss this book.